ESIGNER is a GUI object with:

ESIGNER has at least one child STAGE OPTIONS which will define the requirements for each 'approval' for an ESIGNER EASAP.

ESIGNER VIEWER provides a table showing the status and history of an ESIGNER.

Below we have added eSignature functionality to the Cantilever Plate example EASAP. 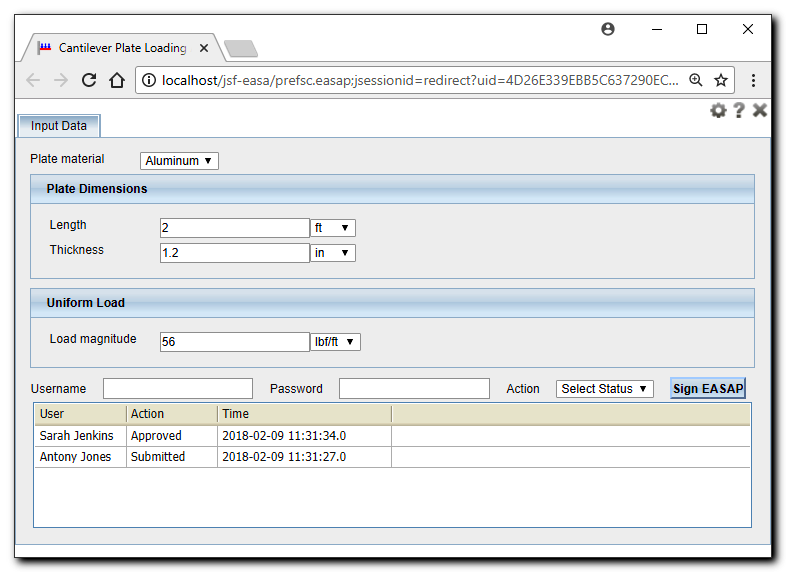 To add an ESIGNER and an ESIGNER VIEWER to the Mortgage Calculator example EASAP follow these instructions.

Disable any subsequent signing of the EASAP. This allows editing a signed EASAP while retaining the signature history being shown.

In general, Lock on Stage: will be a terminal stage where the EASAP data with signatures is passed to further processing after completing the sequence of necessary stages of data processing and data integrity validation.

The signatures in ESIGNER VIEWER are the visible record of this completed sequence.

Data from an Excel Desktop Client or EDC session may be 'authorized as valid' with an electronic signature in the EASAP GUI.

In this case any ESIGNER and ESIGNER VIEWER objects will each need a REFRESH OBJECTS ACTION triggered by a VALUE CHANGED with Objects: case_viewer1 (for example). If a named range cell or the spreadsheet file is changed and the User clicks EASA Ribbon > Save, the CASE VIEWER will update and changes will be propagated to ESIGNER and ESIGNER VIEWER.

If no named range cell (or the spreadsheet file) is modified in an Excel Client but the User clicks EASA Ribbon > Save the case record will be updated but the ESIGNER will not generate a new signature in order to save computational time as generating an electronic signature is computationally expensive.

The reference implementation below allows a mortgage calculation to be created/modified/saved as an EDC case then eSigned: