READ EXCEL ACTION reads data from cells or named ranges as specified in Ranges: for an Excel spreadsheet by referencing existing SHEETs or specifying an Excel named range for a specific spreadsheet in the Sheets: parameter.

Data read from a range in the specified spreadsheet are set as values of explicit LISTs as specified in Lists:

Ranges: is used in conjunction with Types: to determine the data read from the specified spreadsheets.

There are two methods for specifying the range to read:

The format of a cell reference in Ranges: takes one of the following forms:

If ROW or COLUMN is selected in Types: data will be read along the row or column from the specified start cell in the Ranges: parameter until an empty cell is encountered.

When specifying a NAMED RANGE in the Ranges: parameter, type in the name of the NAMED RANGE.

EASAP Builder will auto-complete the parameter, allowing the Author a choice from a drop down list as shown below: 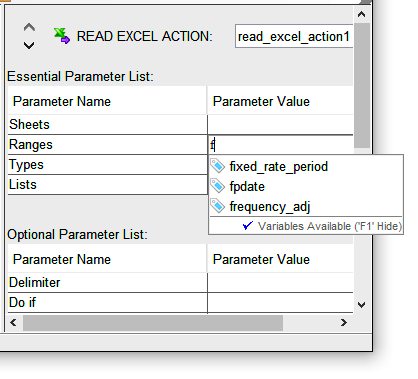 More than one Cell Reference or NAMED RANGE can be specified in the Ranges: parameter by comma separating the individual cell reference or named range values. Therefore, a single READ EXCEL ACTION may populate the values of multiple LISTs.

All four parameters must contain the same number of entries.